UPDATES TO EGA REFERENCE AND FOR SALE SECTION COMING AUGUST 2020!! 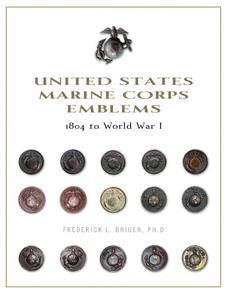 This is the definitive work for those seeking a well-researched and analytical study that draws conclusions as to who made these emblems, when they were made, why they were made and most important, what to look out for in terms of the ever increasing fakes/forgeries. It is the first volume with a planned second volume (1919 to present) to be released in the future. Colonel John Driscoll, USMC endorses and commends Dr Briuer’s work by kicking the book off with a wonderful and complimentary forward.  Col Driscoll, was the first pioneer in describing Marine emblems with his 1971 reference: Eagle, Globe and Anchor 1868-1968.

Decades in the making, Dr Briuer photographed and analyzed some of the oldest and finest collections in the country, from public museum to private holdings. He interviewed older collectors, some of whom started collecting in the 1940’s and 50’s. This is important, as many of these collections existed well before the influx of forgeries, and since many of these collectors have passed on and their collections have since scattered, Dr Briuer had the opportunity to capture their knowledge and collections in photographs. In addition, being an Anthropologist and Archeologist, he used advanced analytical technique as he surveyed thousands of photos to determine periods of emblem wear and tracked devices bought and sold on the internet, especially those with clear provenance that could be traced to periods of wear. He also utilized other authors and researchers (like Alec Tulkoff- Grunt Gear and Equipping the Corps Vol 1: 1892-1937) to glean key purchase and contract documentation out of the archives.

Be warned, this is not a “picture” book, even though photos exist of every described piece. You will have to sit and actually “read” this book.  You will not have any problems if you love the subject or are simply curious about the Marine Corps.  His photographs are full color (with exception of very detailed black and white depictions/drawings) and he depict the fronts of the emblems in 1:1 scale. The only downside to the work is the lack of photo of an emblem’s rear in many, but not all, cases. He thoroughly describes the method of attachment (in text and especially in the appendix) and provides detailed black and white figure drawings of prongs, pins and catches. When Dr Briuer first started the journey decades prior, the collecting frenzy and the collector’s desire for maker’s mark and attachment variation was not there. Due to a lot of these emblems and collections being scattered since starting the effort, he couldn’t go back and start over. In order to maintain consistency, he stuck with photographing the front side of emblems for his work.

Dr Briuer’s treatment follows an evolutionary timeline (it doesn’t jump around or show redundant photos that could confuse the reader). It starts with the earliest insignia, some of which only one or very few examples exist. The reader will love how he clears the air with the now mass produced forgeries of the early stamped insignia from 1804 to 1892, explaining the history and fate of the original Stokes Kirk dies. He delves into die variations and shows the key details to look for in original and reproduced insignia. He gives a thorough treatment of the embroidered Civil War Era officer cap device, 1880’s shako shields and the oversized 1892 cork helmet device. Readers will also be excited that he thoroughly explains the history and wares of one of the finest makers of EGA insignia ever, Karl Breuninger. He wraps with another equally thorough analysis of the enlisted WW1 era collar discs and their origins.

There is a healthy amount of appendices that includes an EGA (officer) database sorted by Dr Briuer’s device coding system, examined photos, and promotion chart that can be used to draw conclusions to when a device could have been worn by said officer. Included in the appendices is a chart of all emblems addressed in the work with description of attachment, weight, and measurements. Dr Briuer, of course, ends with a very thorough and proper citing of his sources, material and credits.

This book is simply stunning in scope and research and Dr Briuer just flat out nails it. You can tell he is still a Marine with his level of attention to detail. It will be the “must have” scholarly reference on your shelf for the subject and will make us all eagerly await volume two. You will find it was well worth the wait and well worth every penny spent if you want to get serious about collecting Marine Corps EGA emblems.